It’s not just paranoia: Driving at night is actually more dangerous. Fatal accidents are three times more likely at night compared with the daytime, according to the National Highway Traffic Safety Administration (NHTSA).

The main reason for this—not surprisingly—is that we can’t see as well in the dark, says Alex Epstein, director of transportation safety at the National Safety Council: “You see less of the road ahead of you and have less room and time to stop.” Ironically, some kinds of light—like the glare from too-bright lights—can compound the problem.

But other factors add to the challenge of driving at night. Here are 12 tips that could help reduce the risk.

Drinking and driving poses a bigger risk after dark, according to NHTSA, which has found that the rate of fatal crashes involving alcohol impairment is almost four times higher at night than during the day. Of course, never get behind the wheel after drinking, no matter what time of day it is (don’t drive while distracted either); but at night, it’s a good idea to put your defensive-driving instincts on high alert. 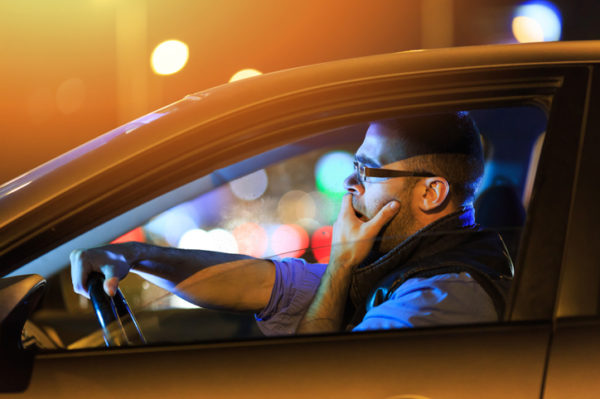 Drowsy-driving crashes are most likely to happen between midnight and 6 a.m., says NHTSA. So be aware during these hours that there may be sleepy drivers on the road—and keep yourself alert. Have some caffeine, pull over in a safe area to get some rest, or stop for the night. Some drivers have reported other activities that can help: turning the radio on (not too loudly); rolling down the windows periodically for fresh air; and talking or singing to yourself.

3. Clean Up Your View

Dirty or damaged windshields can scatter light and potentially increase the effects of glare, according to NHTSA. The group also reports that dirty or damaged headlights can decrease your visibility and cast glare onto oncoming drivers. So clean headlights and windshields regularly; you can use a special cleaning kit for headlights.

NHTSA says two-lane highways may be a “worst-case scenario” for nighttime glare, due to oncoming cars’ headlights, lower overall light, and the fact that these roads tend to have more sharp curves and hills than a freeway. If you can, take a safer route at night.

Speeding-related crashes account for 37 percent of nighttime-driving fatalities, says NHTSA—compared with 21 percent of those during daylight hours—due to lower visibility and shorter reaction times. For example, your headlight typically shines 160 feet in front of you, but even at 40 mph, you need 190 feet to stop. Adjust your speed to take conditions like visibility into account, says Russ Rader of the Insurance Institute for Highway Safety (IIHS).

If the beams tilt down too much, you’ll lose some of the illumination you need while driving. But if they tilt too high, they can blind oncoming drivers. Some states’ annual inspection tests include checking the headlight angle—but otherwise, take the initiative to make sure yours are pointed correctly. “This isn’t usually a DIY project,” says Rader. “Consumers should go to their car dealer or a repair facility for assistance.”

7. Use High Beams When Appropriate

High beams are underutilized, says Rader, but can be very helpful in rural areas or on open roads. Just remember to dim them when you’re within 500 feet of an oncoming vehicle (so you don’t temporarily blind the other driver), and don’t use them if you’re following another vehicle. If you’re in the market for a new car, Rader recommends looking for adaptive lighting systems that automatically adjust your high beams depending on the presence of other cars.

8. Tweak Your Inside Lighting

If your dashboard lights are too bright, glancing from the dashboard to the dark road ahead can be disorienting, says the NSC’s Epstein. “Dim the interior lights at night, so that critical controls remain easily visible but not distracting,” he recommends. “And use your visors at night to shield you from outdoor street lighting and glare.” Many new cars, he adds, have mirrors that automatically dim the reflections from bright light.

9. Look In The Right Direction

While you should always keep your eyes on the road, avoid a fixed gaze and never stare at oncoming headlights, says Epstein. When approaching an oncoming vehicle, avoid being blinded by its headlights by shifting your eyes down and to the right, using the right edge of the road or lane markings as a guide to stay on track. Lift your gaze back up when you’ve passed the oncoming vehicle. 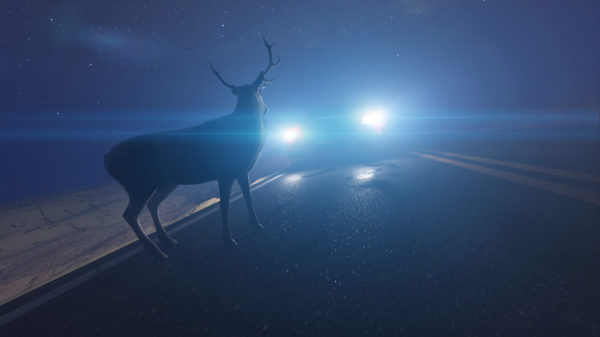 Collisions with deer often happen at dusk or at night and are more common from October to January. Your high beams can help you spot an animal’s glowing eyes. When you see them, the safest way to avoid an accident is by slowing down and stopping—not by swerving.

Get your vision checked every year, suggests the NSC; glare becomes more problematic for people as they age. You may also need a different prescription at night.

12. Test And Use Your Lights

Regularly test all your lights, including low beams, high beams, daytime running lights, turn signals and brake lights. And make sure to use your headlights to stay visible; not only do you need to turn them on when it’s dark, but you should turn them on in adverse weather conditions like rain, snow and hail.

Never be in the dark when it comes to your auto insurance. When you keep the GEICO Mobile app on your phone, you can have easy access on the go to roadside help, digital ID cards and more. Download GEICO Mobile today.

Read more: Heads Up! Are You Driving Drowsy?